This is a rendering of one of the nights in Paris spent by the menage a trois of Katya, Theo, and Guaril.  Though they are on the run from the Nazis and the Communists, they still found time for love. 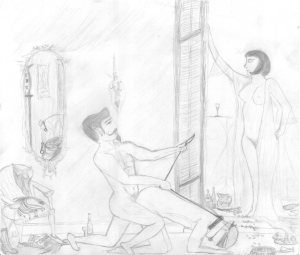 It Will Not Last the Night is a historical fantasy set in the Roaring ‘Twenties Jazz Age.  It centers round four characters who form a long-term relationship: A working class German boy named Theodor Priser, a Communist; his lover, a refugee from the bourgeoisie, a Jewish Anarchist named Katharina Von Rosen; a militant dominatrix named Johanna; and a Roma artist named Guaril.  They face separation, imprisonment, and murder during the course of the decade; and those who survive must face the coming of Hitler’s Germany in 1933–but not before one last, desperate act of political violence against the Nazi regime.

Get the book now at http://chipmunkapublishing.co.uk/?page_id=314

Enter “I” into the search engine, and find it on page 3, second title from the bottom.  Also available in E-Book.