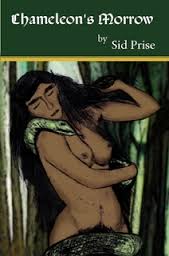 Chameleon’s Morrow is the first book in the fantasy series, Twilight of the Gods, which will be published over the next several years.  Though Sid Prise has published several titles with the UK-based Chipmunka Publishing, he has chosen to self-publish this series, primarily for the freedom that gives him to license it under a very liberal Creative Commons copyright.  Under the terms of the Attribution-Sharealike-Commercial format, Sid opens up his stories in this series to any form of derivative work by anyone in the world–and allows anyone who wishes to sell their derivative work for their own profit.

Sid hopes to challenge the conventional wisdom that authors “own” their stories.  A story that lives in the hearts and minds of its readers are and should be fair game for interpretation and reinterpretation, telling the stories again in shapes of readers’ choosing.  In this, Sid suggests the role of the author is not to make a final statement, a story “set in stone,” but simply to be a midwife for its birth.  Afterwards, the story lives, and grows, able to make love to many other people, who will then give birth to its successors.

This takes the stories out of the libraries and the bookstores and into a more egalitarian place: the ancient and thrilling myth-making round the campfire.  And as we all tell the stories of T’luria, we agree (by assenting to the same Creative Commons licensing) to “share-alike”–to have our new stories also subject to the same interpretation and reinterpretation of others round our campfire.

Twilight of the Gods is therefore Sid’s “thread” through the growing tapestry.  The first book tells the tale of tale of Aurelia of Rasil’yon, an Elf of the Great Western Forests in a time of war.  When she is but the tender age of a hundred-and-three, she embarks on an odyssey that takes her to the cold Northern Tundra, where she is captured by her hated hereditary enemies, the Orcs–and then turned into an Orc herself!  Exiled from her elfin beauty, she must confront her own racism, forced to find friendship amongst the very people she’s always despised.  She escapes her bondage, only to be enslaved anew in the Dwarfish city of Kharahdjo–where she discovers a different life than she’d ever thought to live–the path of the Revolutionary.  She finds herself transformed into a Humanish lass before the story ends–and it is in this body that she faces her worst nightmare–the God of Madness X’pa’aan’oughk–whose slithery vortex threatens to swallow her and all the world.

Following books in his series will trace Aurelia’s life and the lives of her friends, lovers, enemies, and Gods over T’lurian history, and through worlds much closer to home–finally to a place where the Gods of T’luria and the Gods of Earth live and die.  A link to several of the first chapters of Chameleon’s Morrow can be found below.